Love is a burning thing.

782K ratings
Available: Usually ships in 3-5 business days
Add to Cart
Add to Wishlist
Format:  DVD
item number:  Y8EE
Also released as:
Walk the Line (Blu-ray) for $8.40
Related products:
Memoirs of a Geisha for $8.40
The Notebook for $6
91% recommend us! 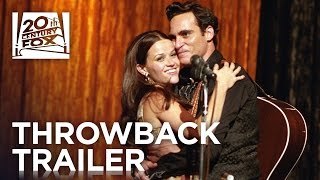 Singer. Rebel. Outlaw. Hero. With his driving freight-train chords, steel-eyed intensity and a voice as dark as the night, the legendary "Man in Black" revolutionized music - and forged his legacy as a genuine American icon. Golden Globe nominees Joaquin Phoenix and Reese Witherspoon star (and sing) as Johnny Cash and June Carter in this inspiring true story of one man's unwavering devotion to his sound, his message and the greatest love of his life.

Primarily the story of the love that grew between country stars Johnny Cash and June Carter during the early years of Cash's career, WALK THE LINE is the result of intense collaboration between director James Mangold, co-writer Gill Dennis, Johnny Cash, and June Carter Cash. Though both Cashes died in 2003, they oversaw the script's development for seven years. Mangold and Cash's insistence that the film's stars would actually sing paid off. Witherspoon's singing (as June) is lovely, and Phoenix's contains the raw energy and soul that defined Cash's sound.

Even as a child on a cotton farm in Depression-era Arkansas, Cash shows a strong interest in music, escaping from his no-frills life and strict father (Robert Patrick) through hymns and listening to the radio. When his brother dies in a freak accident, young Johnny feels responsible, and worries that he will never live up to his brother's goodness. The film follows Cash through his first marriage with Vivian Cash (Ginnifer Goodwin) and into the early stages of his touring career alongside such musicians as Jerry Lee Lewis, Carl Perkins, Roy Orbison, Elvis Presley, and most importantly, June Carter. As Cash's success grows, so does his relationship with drugs, alcohol, and Carter, putting a strain upon his family life. From his initial audition with Sam Phillips of Sun Records on through his legendary 1968 concert at Folsom Prison, Cash is transformed from a hesitant singer riddled with demons to a man whose uniquely bold style would make music history. WALK THE LINE never attempts to paint a full picture of Cash's prolific career, but instead focuses on the passions that drove his music and on the woman who gave him strength. With magical performances by Witherspoon and Phoenix, a haunting and inspiring American romance is brought beautifully to life.