To Have and Have Not
Warner Bros. DVD and Blu-ray Clearance Sale (series) 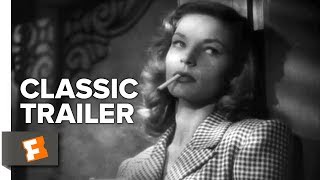 To Have and Have Not Official Trailer #1 - Humphrey Bogart, Lauren Bacall Movie (1944) HD

"You know how to whistle, don't you, Steve? You just put your lips together and blow."

Help the Free French? Not world-weary Harry Morgan (Humphrey Bogart). But he changes his mind when a sultry siren named Marie asks, "Anybody got a match?" That red-hot match is Bogart and 19-year-old Lauren Bacall in her acting debut. Full of intrigue and racy banter (certain whistling instructions), this thriller excites further interest for what it has and has not.

A 40-something Humphrey Bogart and a novice named Lauren Bacall might have seemed like an odd pairing on paper, but their chemistry in TO HAVE AND HAVE NOT ignites the screen. Howard Hawks directs this classic about a jaded American fisherman (Bogart) who risks his life to help a group of French freedom fighters and a sultry young woman (Bacall) with whom he falls in love. The fascinating setting (Vichy-controlled Martinique during the Second World War), the source material (Ernest Hemingway's 1937 novel), and a screenplay co-written by a literary master (William Faulkner) all take a backseat to the on- and off-screen romance between the two legends. TO HAVE AND HAVE NOT is perhaps most memorable for the 19-year-old Bacall seducing Bogart (and audiences) with her lesson on whistling.

Bogie stars as an American sailor in Martinique during World War II. Although money speaks louder than politics in his book, the French Resistance ultimately wins him over -- as does the sexy, seductive Marie, played by Lauren Bacall in her Hollywood debut.