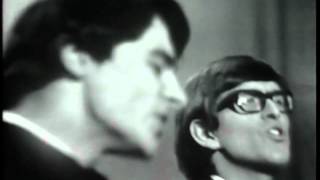 The Zombies - She's Not There (Music Video) 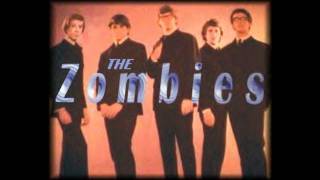 The Zombies - She's not there (HQ) (Music Video)

The Zombies: Colin Blunstone (vocals); Rod Argent, Chris White, Paul Atkinson, Hugh Grundy.
Recorded between 1964 & 1965. Originally released on Parrot (71001). Includes liner notes by Bill Dahl.
This part of Varese Sarabande Records "Varese Vintage" series.
After the double-sided hit single "She's Not There" b/w "You Make Me Feel Good" topped the U.S. charts in the fall of 1964, Parrot Records quickly culled together this LP for 1965 release. The dozen tracks were taken from material the Zombies cut for their 1965 U.K. debut album, Begin Here. Also included are "It's Alright With Me" and "Sometimes" from the combo's self-titled EP. Regardless of presentation, The Zombies (Featuring She's Not There and Tell Her No) aptly portrays the quintet of Chris White (bass), Rod Argent (keyboards/vocals), Colin Blunstone (guitar/vocals), Paul Atkinson (guitar), and Hugh Grundy (drums) in terms of the band's fresh blend of intelligent Brit-pop. Their efforts are equally laudable on the strength of originals such as "Tell Her No" and "What More Can I Do" as they are on the blue-eyed soulful medley interpretation of the Miracles' "You've Really Got a Hold on Me" with Sam Cooke's "Bring It on Home to Me." This is stylistically complemented by the R&B rave-up on Muddy Waters' "I Got My Mojo Working" and the ultra hip jazzy arrangement of the Gershwin standard "Summertime." The Zombies' obvious appreciation for adeptly crafted melodies and rich vocal harmonies likewise made them favorites of pop fans as well as more discerning listeners. "Work 'n' Play" is an instrumental credited to producer Ken Jones. Initially, the piece was simply used to fill out the long-player. That was until the tune was more fully developed by the band, and under the direction of Argent's fiery lead harmonica they turn the proposed filler into a rock & roll killer. Those wishing to obtain a more thorough examination of this era are directed to the decidedly more thorough 2001 Repertoire reissue of Begin Here or the "final word" four-disc Zombie Heaven anthology from 1997. ~ Lindsay Planer

The Ronettes
Be My Baby: The Very Best of the Ronettes (CD)
$8.20 CD Sale
Add to Cart

The Searchers
The Very Best of the Searchers [Universal] (CD)
$12.20 CD Sale
Add to Cart

The Zombies
The Greatest Hits
$13.60 CD Sale
Add to Cart