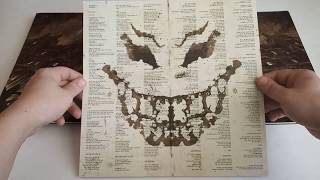 Entertainment Weekly - p.73
"The Chicago metal warriors give Metallica pummel a modern-rock sheen." -- Grade: B-
Billboard (p.28) - "There are enough brains and brawn to make this an ASYLUM any head-banger would be crazy to avoid."

Personnel: David Draiman (vocals); Dan Donegan (guitar, electronics); John Moyer (bass guitar); Mike Wengren (drums).
Audio Mixer: Neal Avron.
Recording information: Groovemaster, Chicago, IL.
Illustrator: Raymond Swanland.
Photographer: Travis Shinn.
Disturbed's fifth long-player opens with an uncharacteristic instrumental, a bleak .And Justice for All-era Metallica-inspired dirge that shoots out the lights and sets the stage for the blistering title cut. That brief detour from the formula will likely draw in some of the band's detractors, but Asylum is hardly a rewiring of the band's sound. What Disturbed has always excelled at is machine-like execution of carefully plotted brutality, and the thirteen tracks that occupy Asylum are textbook examples of the Chicago-based outfit's mastery of commercially viable, yet still cool enough for the fringe, modern metal. The foundation may be set, but between David Draiman's clear and concise, powerhouse vocals, which carry melodies (specifically on the choruses) that ricochet around convention like a pinball, and guitarist Dan Donegan's tasteful, occasionally beautiful guitar work, Disturbed gets to have it both ways. That the band can tackle the Holocaust ("Never Again"), global warming ("Another Way to Die"), lycanthropy ("The Animal"), and miscarriage ("My Child") with the same amount of intensity that they bring to a cover of U2's "I Still Haven't Found What I'm Looking For" (not so cleverly disguised as "ISHFWILF"), is admirable, but what really sets Disturbed apart from other 21st century metal acts is their ability to consistently repackage and resell their sound in a way that avoids redundancy. ~ James Christopher Monger