Young orphan Jenny joins Clarence the cross-eyed Lion, Judy the chimp, Dr. Marsh Tracy and the staff of Wameru in their quest to understand and protect African wildlife. 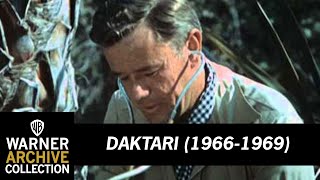 "Daktari"'s fourth season sees some new faces joining the team at Wameru, while still serving up a wild African safari ride of family fun and animal adventure. Dr. Marsh "Daktari" Tracy (Marshall Thompson) continues in his quest to further our understanding of animal behavior while protecting his charges against all threats. Still aiding him are his daughter Paula (Cheryl Miller) and his assistant Mike Makula (Hari Rhodes), while Jack Dane is back in the States on a research fellowship. Into the confines of Wameru comes a young orphan, Jenny (Erin Moran), who quickly captures the hearts of all, especially Daktari. It's a good thing, too, as her innocence reawakens some compassion in hard-bitten-hunter Bart Jason (Ross Hagen), who soon becomes an invaluable aid to Wameru out in the veldt and on the savannah. And with Judy the Chimp and Clarence the Cross-Eyed Lion stirring up trouble, they need all the help they can get.