The song was scandalous. The movie is hilarious! 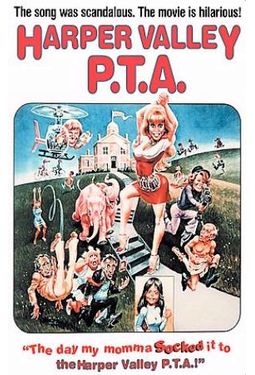 This light comedy, based on the 1960's pop tune, is about a sexy young mom who violates the puritanical standards of a small town of hypocrites. The effective techniques she uses in countering their moral oppression are often quite funny.

What happens when Stella Johnson and her daughter Dee come up against the unwelcome wagon of the Harper Valley P.T.A' Hilarious comedy that's fun for the entire family!

This comic film is based on the best-selling pop song by Jeannie C. Riley.
When the members of the Harper Valley PTA condemn a mother whose behavior they consider "inappropriate," the feisty lady publicly confronts the hypocritical moralists. Soon, she's taught them a lesson they'll never forget: that people in glass houses just shouldn't throw stones.