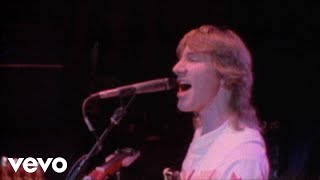 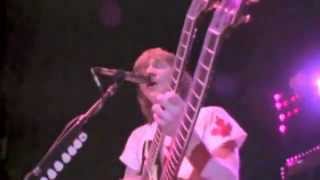 Triumph: Rik Emmett (guitar, vocals), Mike Levine (keyboards, bass) and
Gil Moore (drums, vocals).
Triumph: Rik Emmett (vocals, electric 12-string guitar, 6-string guitar, slide guitar, pedal steel guitar, dobro, synthesizer); Gil Moore (vocals, drums, percussion); Mike Levine (piano, organ, synthesizer, bass guitar).
All tracks have been digitally mastered using 24-bit technology.
One would think that Canadian hard rock power trio Triumph would be in exceedingly high spirits after earning their fourth consecutive platinum album with 1981's career highlight, Allied Forces, but the residue of their most grueling bout of worldwide touring yet had actually left the band physically and creatively exhausted. That being said, the "rock & roll machine" had to keep on right on rolling, and with record company accountants already baying for another million-selling blockbuster, Triumph were soon ensconced back in the studio, trying to harness enough energy and inspiration to make sure that 1983's Never Surrender lived up to the lofty standards that preceded it. Unfortunately, one had only to peel back the deceptively buffed surface veneer applied to Never Surrender's songs to glimpse Triumph's halfhearted effort underneath. Take Rik Emmett's token effort at a majestic radio single, "A World of Fantasy," which certainly adheres to type with its fetching chorus and dense vocal harmonies reminiscent of Styx, but nevertheless sounds like a slightly impoverished cousin to former hits like "Lay It on the Line" and "Magic Power." Likewise, although the guitarist manages to conjure up some excitement with the energetic "All the Way," the less enthusiastic title track -- no matter how classy and pristine in execution -- also bears an uncomfortable resemblance to "Fight the Good Fight" from the band's previous album, Allied Forces. Even no-fuss, driving rockers like "Too Much Thinking" and "Writing on the Wall" emanate a palpable lack of passion. And since the ploddingly paced "Battle Cry" is anything but (more of a moaning truce), the only track that really gets the blood boiling is drummer Gil Moore's "When the Lights Go Down," whose simple yet emphatically delivered blues riff easily makes up for its cornball lyrics. Three instrumental interludes of little consequence are also spread across the album in a thinly veiled time-consuming ploy, and offer just as much proof that Triumph were wanting for endurance and inspiration throughout Never Surrender, the first -- albeit largely camouflaged -- warning of their soon to be declining fortunes. ~ Eduardo Rivadavia