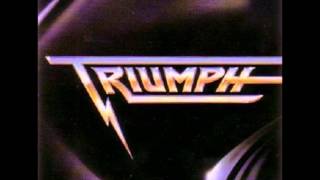 Personnel: Rik Emmett (vocals, guitar); Gil Moore (vocals, drums); Mike Levine (keyboards).
Illustrator: Ron Larson .
Many people thought of Triumph as Rush Pt. 2, and from their first couple of albums, that comparison was not too far off. Another Canadian trio, the group had definite Rush-ish leanings. However, as time went on, they developed a more mainstream '80s metal approach. That somewhat generic style would see Triumph's star grow somewhat brighter than Rush's for a time, garnering them a lot of radio airplay and multiple hits. The lack of depth and individuality of that latter-era material also would see them burn out quite quickly, while Rush kept making a gradual building, both of musical competency and fame. So, while Rush is still in the limelight, Triumph has joined the ranks of the "where are they now?" club. This compilation showcases many of the facets of both sides of the band. It includes plenty of the more mindless and faceless hits while also showing that the group did have a penchant for creating considerably strong material as well. Among the high points are "Hold On," "Magic Power," "A World of Fantasy," and "Fight the Good Fight." The weaker material on show here includes "Tears In The Rain," "Live for the Weekend," and the 38 Special-ish "Follow Your Heart." Hits one and all, those tracks just don't stand up to the other material and really show their age, seeming quite trivial and worn out by now. To its credit, the CD includes a bonus cut in the form of "Rock and Roll Machine," a somewhat raw but inspired track from the first album. One can only regret that they didn't also choose to include "Blinding Light Show." ~ Gary Hill