Get email alerts for Taste
11 ratings
Special Order Item: Usually ships in 7-14 days
LOW STOCK:
Only 1 copy left
Add to Cart
Add to Wishlist
Format:  CD
item number:  Y9J8
Related products:
The Best of Taste (Featuring Rory Gallagher) for $11.98
Taste - What's Going on Taste Live at the Isle of Wright for $14.50
Taste: Live at the Isle of Wight for $8.98
Our customers love us! 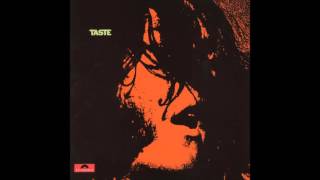 Blister on the Moon-Taste (Music Video) 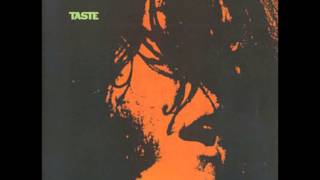 Personnel: Rory Gallagher (vocals, guitar, harmonica); Richard McCracken (bass guitar); John Wilson , John "Sly" Wilson (drums).
The fact that they, like so many late-'60s contemporaries, were molded in the image of Cream has often been cited to diminish the stature of Irish power trio Taste. But, all things being equal, it's impossible to dismiss their fine eponymous debut based solely on obvious source of inspiration, nor, by any means, the singular talents of the band's creative and performing focal point, vocalist and guitarist Rory Gallagher -- barely 20 years of age upon its release in 1969. After opening with the menacing staccatos and power chords of the forward-looking, proto-metal classic "Blister on the Moon," Taste turn right back around and indulge their retro-fueled Brit-blues influences with a bottleneck run through Leadbelly's "Leavin' Blues" -- a show of contrasts that speaks volumes to the breadth of Gallagher's instrumental versatility. The blues keep coming with the guitarist's self-penned showcase "Sugar Mama" and a more restrained acoustic "Hail," then the hard rock fires are stoked once again with "Born on the Wrong Side of Town" -- a track whose regional folk music accents did much to foment Gallagher's enduring status as a blue-collar, Emerald Isle legend. And so it goes until the album's conclusion: with alternating glimpses of past and future musical tendencies peppering remaining tracks "Same Old Story," "Dual Carriageway Pain" (both gritty blues-rockers showing riffs that sometimes smacked of the then brand-new Led Zeppelin), "Catfish" (a traditional blues standard turned monster jam), and "I'm Moving On" (a spare but spunk-filled Hank Snow cover). Ultimately, it's a stylistic stew that would arguably get honed to better focus and achieve greater distinction from the competition on Taste's second album, a year later. But who's to say that Taste didn't have almost as much influence as Cream on future bands such as Rush, whose early records are quite literally mapped out on this release -- a worthy addition to collections of this exciting period in British rock. ~ Eduardo Rivadavia

33%off
Taste
The Best of Taste (Featuring Rory Gallagher)
$11.98 on Sale
Add to Cart

Taste
What's Going on Taste Live at the Isle of Wright
$14.50
Add to Cart

Taste
What's Going On: Live at the Isle of Wright (Blu-ray)
$18.10 Super Savings
Add to Cart