Q: 5 stars out of 5 - "Their records offer mischief and surrealism and bursts of sexed-up joie de vivre....They were simultaneously crazy and compassionate." 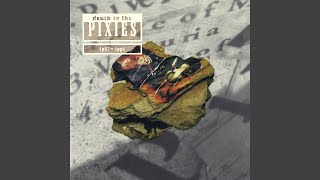 Spin - p.106
"[T]here is a career-spanning clutch of songs that you want - need - to play over and over again....All are here, on one handy disc..."
Q - p.112
5 stars out of 5 - "Their records offer mischief and surrealism and bursts of sexed-up joie de vivre....They were simultaneously crazy and compassionate."
Uncut - p.102
5 stars out of 5 - "[T]hese ripples on the surface of silence are strictly beautiful...the tracks are framed by theory rather than antic wit."

Pixies: Black Francis (vocals, guitar); Kim Deal (vocals, bass); Joey Santiago (guitar); David Lovering (drums).
Additional personnel includes: Eric Drew Feldman (keyboards, synthesizer).
Producers: Gary Smith, Steve Albini, Gil Norton, Pixies.
Recorded between 1987 & 1991.
One of the most revered college-radio bands of the late 1980s and early '90s, Pixies combined smart yet surreal pop with jagged, punk-influenced rock and, oddly enough, broke up just as the alternative music scene went mainstream. Fueled by Black Francis's oft-maniacal vocals and bizarrely catchy songs, the Boston-based quartet--rounded out by bassist/vocalist Kim Deal, guitarist Joey Santiago, and drummer David Lovering--consistently crafted fascinating albums during their brief but headstrong run. This 23-track collection, released in tandem with their highly anticipated 2004 reunion tour, captures many of their finest moments.
Proceeding semi-chronologically, WAVE OF MUTILATION begins with the rambunctious ditty "Bone Machine." Other early gems include the strange anthem "Holiday Song," the anthropomorphic ode "Caribou," and Deal's signature song, "Gigantic." The band's beloved 1989 album, DOOLITTLE, is amply represented by seven songs, including the pleading "Hey," the mischievous "Monkey Gone to Heaven," the fierce "Debaser," and the pop-perfect "Here Comes Your Man." Latter-day tunes include rockers such as "Dig for Fire," "Alec Eiffel," and "Planet of Sound," along with two B-sides, "Into the White" and an excellent cover of Neil Young's "Winterlong." If you're looking for the Pixies motherlode, this is it.