All the Pretty Horses PG-13

Some passions can never be tamed. 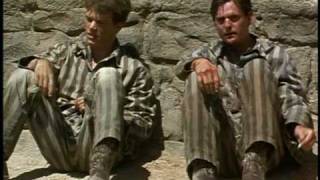 All the Pretty Horses Trailer

"There ain't but one truth. The truth is what happened. It ain't what come out of somebody's mouth."
- John Grady Cole (Matt Damon) lets the Captain (Julio Oscar Mechoso) know he won't cooperate by falsely condemning Jimmy Blevins (Lucas Black)

Billy Bob Thornton's ALL THE PRETTY HORSES is about John Grady Cole (Matt Damon), a young rancher growing up just after WWII. After his mother sells the family ranch, John convinces his best friend, Lacey Rawlins (Henry Thomas), to accompany him to Mexico, where ranching is still a big part of life. Along the way they meet Jimmy Blevins (Lucas Black), a winningly enthusiastic boy with a volatile nature. Eventually, John and Lacey end up on a huge ranch south of the border, where John falls for the wealthy rancher's daughter (Penélope Cruz). This leads to deadly trouble for the two young men, but John won't be dissuaded from pursuing his new love. Thornton has made a credible modern Western with this film, which gets strong performances from Damon, Cruz, Thomas, and, in a star-making turn, Black as the fiery Blevins. ALL THE PRETTY HORSES is at its best when focusing on the dusty details of the ranchers' hard existence. Barry Markowitz's cinematography and Ted Tally's script (based on Cormac McCarthy's much-loved novel) capture a sweet and melancholy flavor in depicting a way of life that seemed long since lost even while a hardy few were still living it.

Action | Adventure | Theatrical Release | Mexico | Love | Based On A Novel

A Walk in the Clouds
$5.80 Super Savings
Add to Cart

The Three Burials of Melquiades Estrada (Blu-ray)
$23.50
Add to Cart