Danger is his middle name. 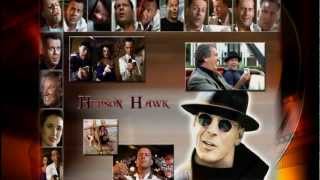 Hudson Hawk (Bruce Willis) has done his time. The infamous cat burglar is released from prison and plans to pursue an honest life. Some of his cronies, however, feel differently and coerce him back into a life of crime. With his best friend, Tommy Five-Tune (Danny Aiello), in tow, Hawk finds himself immersed in a series of complex burglaries, culminating with the theft of a priceless Leonardo da Vinci treasure from the Vatican. Every time Hawk thinks he has the situation under control, a new villain is thrown into the mix. A plethora of quirky characters keeps Hawk hopping, including a misguided secret-agent nun (Andie MacDowell), a greedy, megatrendy couple determined to dominate the world (Sandra Bernhard and Richard E. Grant), a ruthless butler (Donald Burton), and a sinister CIA agent (James Coburn) who heads a team of agents nicknamed after candy bars. Director Michael Lehmann (HEATHERS, AIRHEADS) uses slapstick comedy, special effects, and sight gags to keep the action moving at a raucous pace.

Just released from prison, ace cat burglar Hudson Hawk (Bruce Willis) is forced to plan and execute a series of complex art thefts that will take him and his buddy Tommy Five-Tune (Danny Aiello) all the way to the Vatican. His adversaries include a wealthy couple hell-bent on achieving world domination (Richard E. Grant and Sandra Bernhard), a dastardly butler (Donald Burton), and a sinister CIA agent (James Coburn). Meanwhile, Hawk falls for pretty Vatican agent Anna Baragli (Andie MacDowell), who comes to Hawk for help in pulling off a heist.

The Jewel of the Nile
$6 Super Savings
Add to Cart