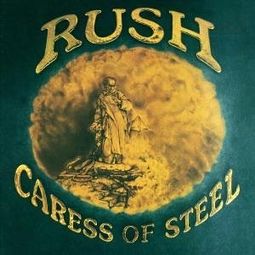 All tracks have been digitally remastered.
Personnel: Geddy Lee (vocals, guitar, keyboards); Alex Lifeson (guitar); Erwig Chuapchuadua (steel guitar); Neil Peart (drums).
Arrangers: Rush; Terry Brown.
Caress of Steel finds Rush in a holding pattern, essentially repeating the hard rock sounds of Fly by Night, even though the group tries to incorporate elements of prog-rock -- note that there are not one but two multi-part suites, "The Necromancer" and "The Fountain of Lambeth." Despite a couple of fine musical interludes, the record fails to capture the complex interplay the group was beginning to display on-stage, and it's only interesting in retrospect. ~ Stephen Thomas Erlewine