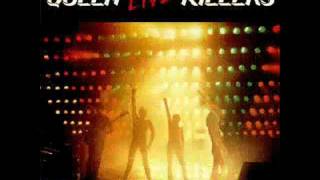 Queen: Freddie Mercury (vocals, keyboards), Brian May (guitars, vocals), John Deacon (bass), Roger Taylor (drums, vocals).
Recorded live on Queen's January-March 1979 European tour.
Digitally remastered from original master tapes.
Personnel: Brian May (vocals, guitar, banjo, keyboards); Freddie Mercury (vocals, piano); Roger Taylor (vocals, drums); John Deacon (guitar).
Recording information: Queen European Tour (01/1979-03/1979).
Arranger: Brian May.
Although many think of Queen foremost as a band that excelled in the recording studio, the group was also an exceptional live band, as the 1979 double disc LIVE KILLERS demonstrates. After years of honing its stage act, Queen had become one of the world's premiere rock concert attractions, featuring elaborate staging and costumes. Recorded during a two-month European tour in support of the JAZZ album, LIVE KILLERS does an excellent job of mixing the hits with the lesser-known songs, and inspired playing by all four members adds an additional element of excitement.
LIVE KILLERS contains two versions of Queen's famous anthem "We Will Rock You"--a fast rocking version opens the set, while the foot-stomping original closes the album along with its counterpart, "We Are the Champions." Due to the abundance of material to choose from, Queen often combined several tracks as a medley. For this outing, the medley was comprised of "Death on Two Legs," "Killer Queen," "Bicycle Race," "I'm In Love with My Car," and "Get Down, Make Love." Other highlights include positively electric versions of "Now I'm Here," "You're My Best Friend," "Keep Yourself Alive," "Brighton Rock" and, of course, "Bohemian Rhapsody."

Customer Rating:
Based on 62 ratings.


There are several live Queen albums to choose from, but this is the first & the best. It's a vibrant, hard hitting recording featuring outstanding live versions of many of their hits up to this point, plus other outstanding performances of lesser known, often better songs.

Queen were as raw & cunning live as they were clever and complex in the studio. My only complaint is the inexplicable omission of material from the stellar Queen II album. Otherwise, Live Killers is a great summation to Queen's "classic" years.