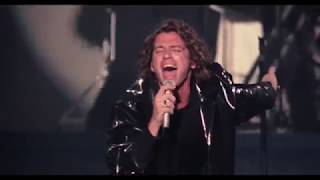 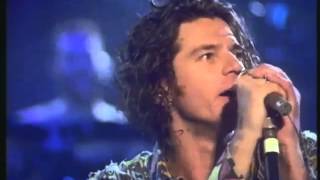 A collection of performances from throughout INXS' live career.
The cover shot of Michael Hutchence in a sort of crucifixion pose, as if presenting himself to the audience for their adulation, is misleading. Although INXS's late singer was clearly the band's visual and commercial focal point, it was the rest of the band--guitarist Tim Farriss, keyboardist Andy Farriss, sax player Kirk Pengilly, excellently-named bassist Gary Garry Beers and powerhouse drummer Jon Farriss--that made INXS one of the most distinctive and inimitable bands of their era.
Born on the Sydney surfer bar circuit, where hard-rocking tightness is essential, INXS grew to add pop savvy, techno-rock sheen and disco twists to their Stones-inspired sound, and LIVE BABY LIVE sounds like the work of a band that's been working together non-stop for over a decade. The early tracks, such as "The One Thing" and "Burn For You," sound particularly improved by the band's lock-groove timing.