The Jam In the City 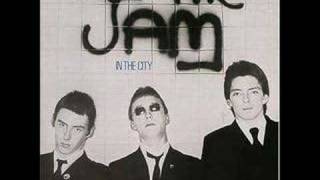 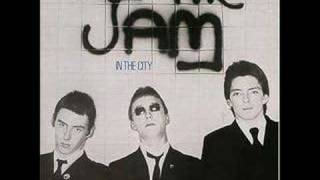 The Jam: Paul Weller (vocals, guitar); Bruce Foxton (vocals, bass); Rick Buckler (drums).
Mod rocker's hugely influential first LP re-released and remastered. German import.
Personnel: Paul Weller (vocals, guitar, keyboards); Bruce Foxton (vocals, bass guitar); Bruce Foxlar (vocals); Rick Buckler (drums).
Liner Note Author: Pat Gilbert.
Recording information: Polydor Studios, London, England (03/1977).
Photographers: Ebet Roberts; Martyn Goddard; Ian Dickson.
In the Year of Punk, the Jam's exploded onto the music scene with this seminal debut album. The raw, unfettered aggression of the band's approach was well in keeping with the spirit of the times, but the heart of their songs and sound lay in the mod movement of the mid-'60s (early Who, Creation, etc.). Singer/guitarist Paul Weller comes off like a cross between Joe Strummer and the young Pete Townshend, bashing unreservedly through "Slow Down," one of the R&B tunes that inspired the original mods.
Weller extols the virtues of frenzied dancing and nonconformist youth culture ("Non-Stop Dancing," "Away From the Numbers") over the raging three-chord attack of bassist Bruce Foxton and drummer Rick Buckler. The pure punk insouciance of his words and delivery is a perfect match for the raging but hooky "arrangements," which basically consisted of the band walking into the studio and blazing through their live set. Rickenbacker guitars never sounded so thick, and skinny ties never seemed less geeky.

42%off
The Jam
That's Entertainment: The Collection
$6.90 CD Sale
Add to Cart