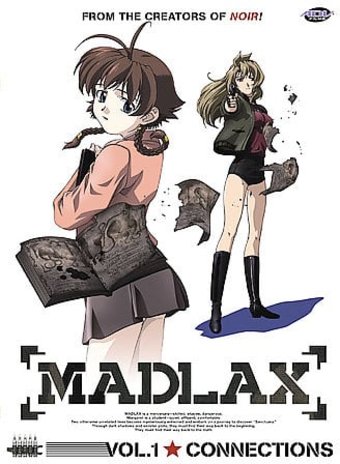 The creators of NOIR continue their tradition of girls with guns and mysterious pasts in the action-packed anime series MADLAX. Racked by 12 years of civil war, the country of Gazth-Sonika is overrun by armed rebels, spies, assassins, and covert organizations that take advantage of the chaos to ply their wares. Shadowy profit-seekers thrive in the unstable environment, including Friday Monday, the masked leader of the criminal Enfant intelligence group; and sexy female assassin Madlax, who sells her mercenary skills with the help of a mystery contact known only as SSS. Meanwhile, rich orphan schoolgirl Margaret Burton lives miles away in the peaceful country of Nafrece, in many ways a normal high school student--except for haunting dreams and memory lapses that hint at a hidden connection between herself and Madlax. Melancholy and suspenseful, the anime series chronicles the parallel destinies of its two heroines with stunning action animation and atmospherics. This volume introduces the series with the first four episodes.