Bruce Hornsby A Night on the Town

Rolling Stone: 3 Stars - Good - "...Hornsby is out to prove that he's a rocker...coaxes jazz, rock, country and gospel into a vibrant, instantly recognizable sound..." 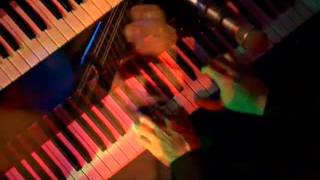 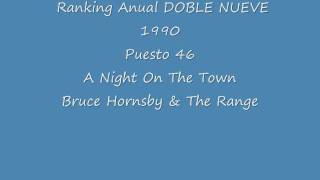 A Night On The Town Bruce Hornsby & The Range (Music Video)

Recording information: Kingsound; Larrabee Studios; Record One.
Bruce Hornsby's hardest-rocking album, A Night on the Town announces that he is heading into a different direction in its first few notes. John Mellencamp's producer Don Gehman gives the sound, especially John Molo's drums, a feel reminiscent of Mellencamp's best work. The material here is among Hornsby's best, and guest players include Jerry Garcia, tenor saxman Wayne Shorter, banjo virtuoso B‚la Fleck, vocalist Shawn Colvin (before she was known), and jazz bass legend Charlie Haden. The arrangements still include the mix of synthesized and real percussion, and the trademark piano licks are sprinkled abundantly throughout, but the overall feel is much more rock & roll than anything before or since. The songs are great, with a political edge to "Fire on the Cross" and "Barren Ground." The latter features Garcia's lead guitar, the former a fine Shorter sax solo. "Stander on the Mountain" is a perceptive reflection on a former BMOC, straight out of Hornsby's own attendance at a high school reunion, and "Lost Soul" is one of the most profound ballads he has composed, sung as a duet with Colvin. The single, "Across the River," is a powerful look at the pursuit of one's dreams in the face of local naysayers, and the subsequent return to one's hometown with the resultant "I-told-you-so's." With A Night on the Town, Bruce Hornsby achieves a mix of mostly up-tempo rock music, adult lyrical themes, and crisp production values that has seldom been matched by other popular musicians of his generation. Though it only peaked at number 20 (his first two albums had reached the Top Five), it is an artistic high point. ~ Jim Newsom

Bruce Hornsby
Scenes from the Southside
$18.40
Add to Cart

Bruce Hornsby
Scenes From the Southside
$6.97 on Sale
Add to Cart