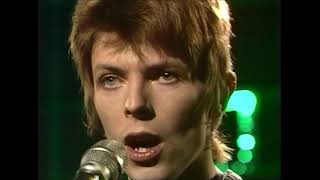 Personnel: David Bowie (vocals, guitar, saxophone, piano); Mick Ronson (vocals, guitar, piano); Trevor Bolder (bass); Mick Woodmansey (drums).
Principally recorded at Trident Studios, London, England.
Every track on ZIGGY STARDUST & THE SPIDERS FROM MARS sounds like it was pulled from the rock 'n' roll bible. The album created a mythology that reached beyond the Chuck Berry folklorisms of the everyday rocker to create a new type of rock star. With ZIGGY, Bowie created a viable alter-ego to descend onto the planet and wreak havoc on rock's fertile soil. In doing so, he created the most original rock creation since the music's inception 20 years before.
Musically, the album was as inspired as Ziggy's persona. Mick Ronson's snarling guitar evoked the triumphant power of the late '60s guitar heroes, but added a flash so dynamic fans knew why the Spiders were labelled "glitter rockers." As an album, ZIGGY STARDUST told the story of rock through the eyes of Ziggy, an alien--with a narrative that was equally sensational and intimate.
Any doubts as to Bowie's intentions to take over rock were displaced on a closer listen to "Star." At the end of the song Bowie (as Ziggy) whispers, "just watch me now," and his determination is eerily obvious. Combining skills as a mime artist and top-rate vocal dramatist, Bowie created Ziggy, the bisexual space man, who sang "songs of darkness and disgrace." The planet was dying, something made evident on the first track "Five Years," and the only way to survive was to "Hang On To Yourself."
In the end, "they had to break up the band," according to the tale told in ZIGGY STARDUST, but the inevitably tragic strains of this "Rock 'N' Roll Suicide" had left their mark on the dying planet. They are still being felt today.