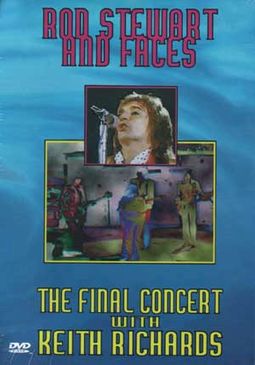 Get email alerts for Rod Stewart
20 ratings
Available: Usually ships in 1-3 business days
Add to Cart
Add to Wishlist
Format:  DVD
item number:  GJHE
Related products:
Rod Stewart - One Night Only for $13.60
The Guess Who - Running Back Thru Canada for $16.30
Stereophonics - Language.Sex Violence.Other? for $5.98
91% recommend us!

This is the final rollicking concert of the legendary Faces, featuring a high powered performance from Keith Richards, Rod himself shakin? his booty like there?s no tomorrow, and a string section for a little class. Although Rod Stewart went on to bigger success, many say his association with Faces was the musical highpoint of his career and this film is the cinematic proof.

From "Twisting The Night Away" to "You Send Me" to "Sweet Little Rock And Roller" through many more of their hit songs, Rod and the band (including Ron Wood on guitar) crank out the hard-driving rock that made them famous. Brandishing the microphone with all the gusto of a soldier holding a live hand-grenade, Rod captures the spotlight and never lets it go. If you think you know Rod Stewart from his ballad and disco days, this film will reveal his rock and roll roots.

The ebullient British popster takes the stage with his original rock-and-roll outfit, Faces, for their final appearance. One of the premier second wave Mod groups of 1970's England, the Faces reentered the pop cultural imagination when their song was included in 1998's acclaimed comedy RUSHMORE. Includes guitar work from Ron Wood and Keith Richards, who help out on such barnburning standards as "Twistin' the Night Away" and "Sweet Little Rock 'n Roller." Filmed live in London in 1975.