Terror swoops through the heart of a city in the dead of night!

1K ratings
Currently Out of Stock: We'll get more as soon as possible
Notify Me When Available
Add to Wishlist
Format:  Blu-ray
sku:  6ASVG
Related products:
The Thing from Another World (Blu-ray) for $17.98
Science Fiction Theatre: A History of the Television Program, 1955-1957 for $29.98
A Nightmare on Elm Street 5: The Dream Child for $3.98
Life Happens (Blu-ray) for $4.19
L!fe Happens for $4.89
Our customers love us! 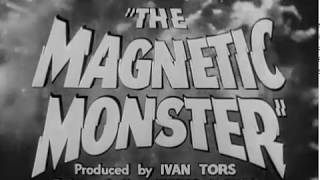 Curt Siodmak's THE MAGNETIC MONSTER (1953) is a truly novel science fiction film, in terms of its rather cerebral plot and low-key, quietly intense execution. As much a mystery and, in its first half, a manhunt, as it is a sci-fi-thriller, the movie pushed lots of suspense buttons for viewers in 1953 and still holds up more than a half century later. Richard Carlson (who also co-produced) plays Dr. Jeff Stewart, an agent for the Office of Scientific Investigation. Stewart and his colleague, Dr. Dan Forbes (King Donovan), begin searching for a dangerously radioactive element, which they have good reason to believe is somewhere in the Los Angeles area. They soon learn that this is no ordinary investigation -- among its other attributes, the unknown element generates enough radiation to kill, and also manifests a powerful magnetic field. The trail leads them to Dr. Howard Denker (Leonard Mudie), a rogue scientist who, working on his own, has created a new isotope of an element called serranium, which proves to be not only highly radioactive, but dangerously unstable in ways that science has never seen before. Every 11 hours, the serranium mass enters a growth cycle requiring massive amounts of energy, which it obtains by absorbing the energy from the atomic structure of any matter around it, releasing huge amounts of radiation in the process. The serranium mass doubles in size with each cycle, doubling its energy needs in the process, as well as the potential destructiveness of the next cycle. The danger lies not only in the potential for destruction in the serranium's rapidly increasing energy absorbtion, but its ever-increasing mass, which, at some point, will threaten to unbalance the Earth itself, in its rotation and orbit. Long before that, however, the resulting radiation is going to start killing large numbers of people, and the destructive force accompanying it will threaten to split the Earth's surface apart. Stewart and Forbes soon recognize that the only hope they have of stopping the process is to get ahead of it, by bombarding the serranium with enough energy to force it to divide into two relatively stable elements. The only possible source of sufficient energy is the world's largest cyclotron, which has been built by the Canadian government in Nove Scotia -- but is even it powerful enough to do the job, and can they get the deadly isotope there in time'