The first motion picture in CinemaScope--the modern miracle you see without glasses! 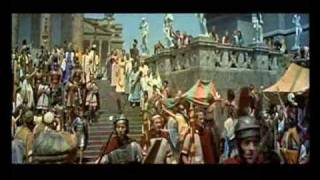 Based on a best-selling novel by Lloyd C. Douglas, THE ROBE is one of the best Biblical epics of all time. Richard Burton stars as Marcellus Gallio, a Roman who, after leading the crucifixion of Christ, takes home Jesus' robe and is subsequently torn by nightmares and guilt. A distraught Marcellus makes his way back to Palestine, where a humble attempt to discover more about the man who died by his hand puts him on a miraculous path toward redemption. Originally released in 1953, this crisp and vibrant film was one of the first to be filmed in beautiful, expansive CinemaScope. It was nominated for five Academy Awards, including Best Picture, Best Actor, Best (Color) Cinematography, Best (Color) Costume Design, and Best (Color) Set Direction-Art Direction. Jean Simmons, Victor Mature, and Jay Robinson offer stellar supporting roles.

The first movie ever filmed in CinemaScope, THE ROBE ws nominated for five Academy Awards in 1953, including Best Picture and Best Actor for Richard Burton. Burton stars as Marcellus Galilo, the Roman centurian charged with overseeing the crucifixion. But when he wins Christ's robe in a gambling game at the foot of the cross, his life is forever changed.

Fictional story of a Roman senator whose life is changed when he comes into contact with the robe that Christ wore when he was crucified.