Q: 4 Stars - Excellent - "...[The Smiths'] were getting more daring....it was weird, but only someone who had been drinking heavily would dub it an outright disappointment..." 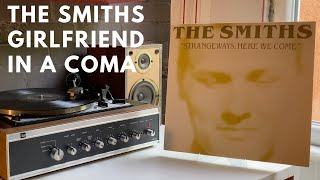 The Smiths - Girlfriend In A Coma (Vinyl) (Music Video) 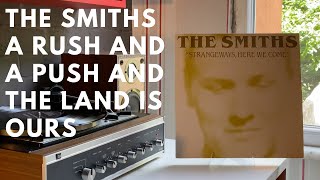 The long-awaited vinyl reissue of the original U.K. LP.

The Smiths: Morrissey (vocals, piano); Johnny Marr (guitar, piano); Andy Rourke (bass); Mike Joyce (drums).
Recorded at The Wool Hall, Bath, England in the spring of 1987.
The Smiths' underrated and unjustly maligned swan song found the band experimenting with sound and arrangement more than ever before. From the epic instrumental introduction to "Last Night I Dreamt That Somebody Loved Me" to the dark instrumentation of "Death Of A Disco Dancer," STRANGEWAYS HERE WE COME is a sonically rich album, filled with extremes and surprises. Among its many highlights are its signature tune "Girlfriend In A Coma," and the stingingly autobiographical "Paint A Vulgar Picture," which also happens to contain one of the most inspired, melodic guitar passages of Johnny Marr's legendary career.
Produced by future Morrissey collaborator Stephen Street, STRANGEWAYS is a document of a band's "fierce last stand." An inner sleeve photo shows an exasperated studio shot of a lone figure (the cigarette suggests Marr) obviously at wit's end. The album's conceptual looseness, while not necessarily a bad thing ("Death At One's Elbow" notwithstanding), suggests that the band unit was probably not at its most cohesive. The album's finisher, however, "I Won't Share You," is as tender and graceful a thing as the group ever recorded, a fitting farewell to one of pop music's most engaging teams.

32%off
The Smiths
Meat Is Murder
$7.49 Super Savings
Add to Cart