For $40 a month and a shiny Tin Star...the young sheriff faced the mob alone...except for the angry ex-sheriff who couldn't watch him die and a hero-worshipping boy who lived only for the day he'd wear a TIn Star of his own! 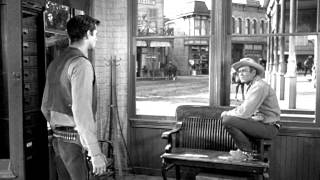 When a small town's sheriff is murdered, inexperienced deputy Ben Owens (Anthony Perkins) steps in as a temporary replacement. Idealistic and eager to succeed, Owens enlists the services of ex-lawman turned bounty hunter Morg Hickman (Henry Ford) to help him grow into his new role. The cynical, world-weary Hickman forges a bond with the younger man as he confronts his own lost idealism and falls in love with a widow (Betsy Palmer) who shares his outcast status. A leisurely but engaging character-driven Western.

Bounty hunter Morg Hickman takes the inexperienced young lawman Ben Owens under his wing and teaches him to maintain control of the town he is sworn to protect. Owens is under pressure from his girl to give up the job, which gets tough when a lynch mob tries to hang the murderers of the well-like town doctor and a local thug, Bogardus, challenges his authority. Hickman, a former sheriff and reluctant mentor, also takes a part-Indian youngster under his protection, whose mother, Nona, takes a romantic interest in Hickman.

15%off
Gunfight at the O.K. Corral
$11 Super Savings
Add to Cart