Amy Winehouse Back To Black

Entertainment Weekly: "It's precisely Winehouse's lyrics...aching, flirty, and often straight-up nasty -- that raise this expertly crafted set into the realm of true, of-the-minute originality." -- Grade: A- 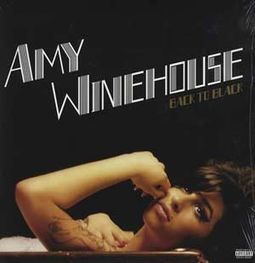 Rolling Stone - p.76
3 stars out of 5 -- "Winehouse is a nervy, witty songstress whom indie rockers, pop fans and hip-hoppers can dig."
Rolling Stone - p.115
Included in Rolling Stone's "50 Top Albums of the Year 2007" -- "[W]ith a brassy, intensely personal sorrow that is true blues, not nouveau soul."
Spin - p.79
"[A] breakthrough, producers Salaam Remi and Mark Ronson surround her with brass sections, string sections, harp, Wurlitzer, the works."
Entertainment Weekly - p.67
"It's precisely Winehouse's lyrics...aching, flirty, and often straight-up nasty -- that raise this expertly crafted set into the realm of true, of-the-minute originality." -- Grade: A-
Entertainment Weekly
"A gorgeous, aching, defiant mix of contemporary and vintage R&B from an artist at the top of her game..."
Q (Magazine) - p.134
4 stars out of 5 -- "Winehouse is one of the best things to have happened to British pop recently."

It doesn't take much listening to Amy Winehouse's 1960s pop period piece to realize that this is a tribute with an edge--nice girls back then didn't sing about boozing and rehab. Since her 2003 debut album, FRANK, Winehouse has been a frequent presence on the gossip pages of the U.K. tabloids, and her songwriting here candidly reflects her experiences with drinking, sex, and drugs.
BACK TO BLACK's production is an artful blend of sophisticated '60s R&B and 21st-century stylistic poaching, with "Tears Dry on Their Own" incorporating elements of Marvin Gaye and Tammi Terrell's "Ain't No Mountain High Enough," and Winehouse sounding like Billie Holiday fronting a reggae band on the old-fashioned cheating song "Just Friends." Densely packed with musical history and often conjuring a dark, Portishead-esque atmosphere, BACK TO BLACK is a sumptuous-sounding collection freighted with blunt confessionals of a lush life.