Get email alerts for Rainbow
77 ratings
Currently Out of Stock: We'll get more as soon as possible
Notify Me When Available
Add to Wishlist
Format:  CD
sku:  ZUCL 0511
Related products:
Elf for $6.97
Ritchie Blackmore's Rainbow for $8.49
92% recommend us! 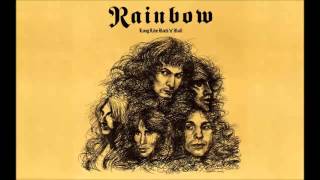 Rainbow includes: Ronnie James Dio (vocals); Ritchie Blackmore (guitar); Cozy Powell (drums).
All tracks have been digitally remastered.
Released in 1978, LONG LIVE was the final Ronnie James Dio-fronted release by Rainbow. Dio would go on to front Black Sabbath, while guitarist Richie Blackmore would reunite with Deep Purple. The album caps off a string of tremendous releases from one of the strongest branches on the heavy-metal family tree.
The title track is a fan favorite and one of the strongest tunes from this era--a heavy rock tune written for arenas. "Lady of the Lake" is a solid number featuring haunting background vocals. "L.A. Connection" features the piano tinglings of keyboardist David Stone. "Gates of Babylon" is a mammoth track featuring the Bavarian String Ensemble, as synthesizer and strings combine for a symphonic big-rock sound. Another standout is "Kill the King," a speedy, full force tune with Mr. Blackmore doing what he does best. Blackmore opens the thunderous "The Shed (Subtle)" with a fluid, effects-laden bluesy solo. "Rainbow Eyes" is a seven-minute epic that features a string quartet, flute, and Dio's euphonic balladry. LONG LIVE, while not the masterwork that is RAINBOW RISING, is a strong album that ends the Dio era on a high note.

25%off
Rainbow
Since You Been Gone: The Best of Rainbow
$8.98 CD Sale
Add to Cart