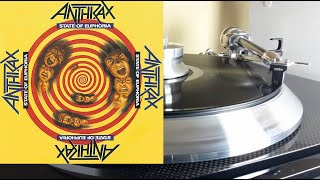 Anthrax: Joe Belladonna (vocals); Dan Spitz, Scott Ian (guitar); Frank Bello (bass); Charlie Benante (drums).
Recorded at Quadradial Studios, Miami, Florida.
Personnel: Joey Belladonna (vocals); Dan Spitz (guitar, electric guitar); Carol Freedman (cello); Charlie Benante (drums).
Audio Mixer: Bridget Daly.
Recording information: Quadradial Studios, Miami, FL.
Photographer: Gene Ambo.
1988's STATE OF EUPHORIA became Anthrax's first gold-certified full-length album shortly after its release, as the band was introduced to a wide new audience by opening up a stateside tour for Ozzy Osbourne. But although the band picked up new fans, many of Anthrax's old guard felt that this sixth overall release pushed the band in a less-than-savory commercial direction. Though not as strong as 1986's AMONG THE LIVING, STATE OF EUPHORIA still proved to be a much-needed alternative to much of the soft glam metal being proliferated by MTV and pop radio at the time.
In keeping with the band's past couple of releases, Scott Ian's lyrics are quite thought-provoking and imaginative. "Out of Sight, Out of Mind" addresses the ripping of older bands by startup metal outfits; "Make Me Laugh" is about two-faced televangelists; and "Now It's Dark" goes inside the mind of the deranged character Frank Booth from the movie BLUE VELVET. The album's best-known song however, is the anthemic cover of Trust's "Antisocial," which spawned a popular MTV video. But Anthrax showed that it retained its lighthearted side with the final two songs, "13" and "Finale."

63%off
Anthrax
Madhouse: The Very Best of Anthrax
$5.98 on Sale
Add to Cart