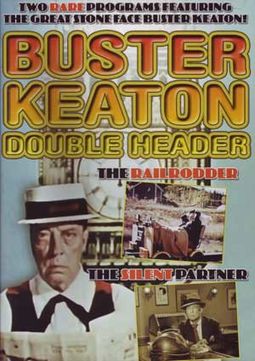 As one of the most regarded and beloved legends of film and comedy, the Great Stone Face is heralded for such inarguable classics as THE GENERAL. This double feature casts a light on two of Buster Keaton's lesser known yet entirely worthy short works: THE RAILRODDER, which is chock-full of memorable sight gags, and the silent film parody THE SILENT PARTNER.

Joseph Frank "Buster" Keaton (October 4, 1895 - February 1, 1966) was an Academy Award-winning American comic actor and filmmaker. Best known for his silent films, his trademark was physical comedy with a stoic, deadpan expression on his face, earning him the nickname "The Great Stone Face" (referencing the Nathaniel Hawthorne story about the "Old Man of the Mountain"). He has also been called "The Michelangelo of Silent Comedy". Keaton's career as a performer and director is widely considered to be among the most innovative and important work in the history of cinema. He was recognized as the seventh greatest director of all time by Entertainment Weekly. A 2002 world-wide poll by Sight and Sound ranked Keaton's The General as the 15th best film of all time. Three other Keaton films received votes in the survey: Our Hospitality, Sherlock, Jr., and The Navigator. We are pleased to present to you two of Buster Keaton's lesser seen works: THE RAILRODDER A screen short starring Buster Keaton, this is one of the last films of the comedian's long career. As "the railrodder" he crosses Canada from east to west on a railway track speeder. As might be expected, the film is full of sight gags as Keaton putt-putts his way to British Columbia. Not a word is spoken throughout, and Keaton is as spry and ingenious at fetching laughs as he was in the days of the silent slapsticks. THE SILENT PARTNER A seldom seen episode of the NBC anthology series "Screen Directors Playhouse" entitled The Silent Partner and originally broadcast on December 21, 1955. Comedic genius Buster Keaton plays a former silent-film star named Kelsey Dutton. Dutton watches the Academy Awards on television in a bar; in flashbacks, Keaton re-enacts Dutton's silent comedies. The silent-film parody is close enough to Keaton's old work to be poignant and funny, yet different enough to be part of Dutton's character. This interesting and rare show features Zasu Pitts, Joe E. Brown, Jack Elam and Bob Hope.