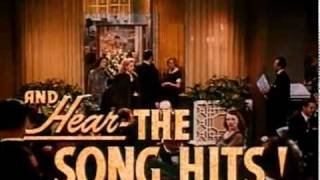 She can ski too! Slipping a fur-lined parka over her trademark bathing suit, Hollywood's favorite mermaid hits the snow-covered slopes of Idaho's famous Sun Valley in this charming, song-filled romantic comedy. But never fear, aqua lovers, for the film also features two Esther Williams water ballets. Cast as a successful swimming star, Miss Williams has never looked lovelier as she travels to Sun Valley to help her lovesick roommate (Paula Raymond) snare her rich but elusive boss (John Lund). But when both Lund and bandleader Van Johnson fall head over heels for Esther, she finds herself having to tread water in a sea of light romance. With its breathtaking scenery captured in rich Technicolor, this lavish production features a top-drawer cast that includes Mel Torme, Clinton Sundberg and Amanda Blake -- plus special appearances by Lena Horne, Eleanor Powell and Red Skelton.

Out on the snowy slopes of Sun Valley, Idaho, a beautiful girl tries to help patch up her roommate's romance, but ends up falling in love herself.