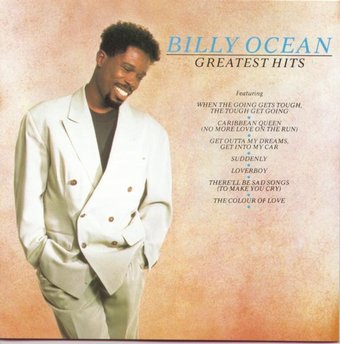 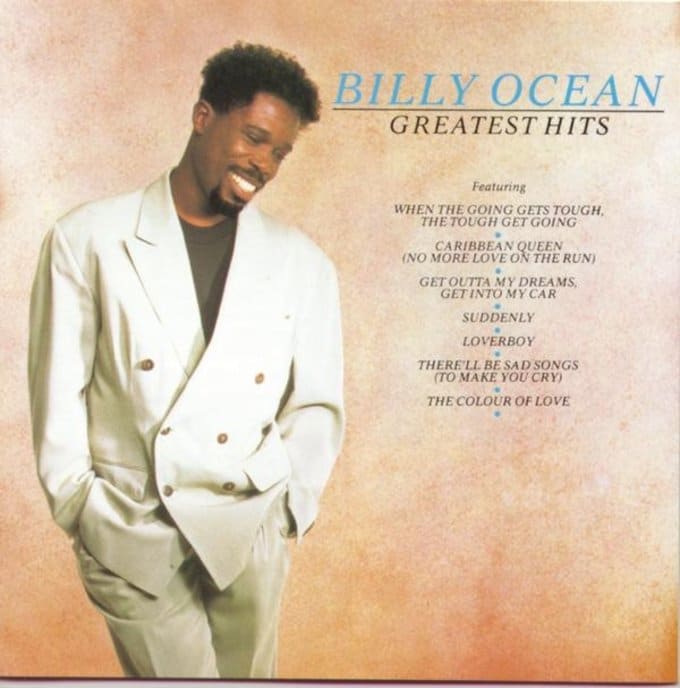 Personnel includes: Billy Ocean (vocals); The Fresh Prince, Mimi (rap vocals).
Producers: Barry J. Eastmond, Robert John "Mutt" Lange, Keith Diamond, Wayne Brathwaite.
Lyricists: W. Smith; Keith Diamond; Robert John "Mutt" Lange; Teddy Riley; Barry J. Eastmond; Wayne Brathwaite; Billy Ocean.
Personnel: Billy Ocean (vocals).
Audio Mixers: Nigel Green; Bryan New.
Photographer: Andy Earl.
Unknown Contributor Role: Phil Nicholas.
Billy Ocean's Greatest Hits packs nearly all of the singer's charted singles that were on the Jive record label. Ocean scored an impressive run of feel-good Top 40 hits in the mid- to late '80s, including three number one singles, those being the classic post-disco jam "Caribbean Queen," the ballad "There'll Be Sad Songs (To Make You Cry)," and the high-energy pop ditty "Get Outta My Dreams, Get Into My Car." Ocean's Top Ten hits, which all appear here, include the dance-pop of "Loverboy" and "When the Going Gets Tough, the Tough Get Going" (from Jewel of the Nile), the soft ballad "Suddenly," and the soul nugget "Love Zone." The music was irresistibly pop, with some of these songs ranking as the catchiest, most radio-friendly music the '80s had to offer. The only hits not found on this set are the ballad "Love Is Forever" and Ocean's first major U.S. hit, 1976's "Love Really Hurts Without You." The funky, delightful "License to Chill," a Top 40 hit in its own right, is one of two later tracks on this set. The other is the dreadful "I Sleep Much Better (In Someone Else's Bed)." As a final note, "Loverboy," "When the Going Gets Tough," and "Caribbean Queen" are included in their edited, single versions. ~ Jose F. Promis

James Ingram
The Greatest Hits: The Power of Great Music
$7.80
Add to Cart