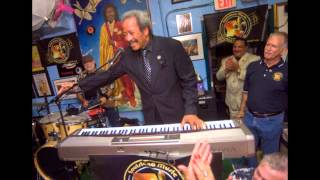 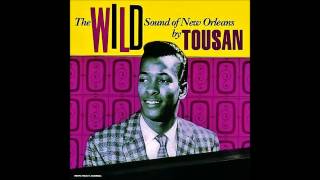 This collection includes four rare Seville singles that were released from 1960-1963 under the name "Al Tousan, and the complete RCA LP." It also contains previously unreleased recordings and alternate versions, as well as a 20-page booklet with photos, a discography and informative liner notes by Rick Coleman.
Personnel: Allen Toussaint (piano, organ); Justin Adams, Roy Montrell (guitar); Nat Perrilliat (tenor saxophone); Alvin "Red" Tyler (baritone saxophone); Melvin Lastie (cornet); Frank Fields (bass); Charles "Hungry" Williams (drums).
Producer: Danny Kessler.
Reissue producer: Rick Coleman.
Recorded at Cosimo's Studio, New Orleans, Louisiana on January 29, February 26 & 27, 1958 and December 7 & 8, 1959.
From the German-based Bear Family Records reissue label comes over two-dozen selections by a young Allen Toussaint (piano) during his earliest outings as a solo artist -- albeit under the slightly truncated nom de plume of "A. Tousan" or simply "Tousan." Although he'd been gigging and sitting in on a variety of Crescent City R&B sessions, it was RCA Records' Danny Kessler who took the initiative to book studio time for Toussaint. That very first endeavor -- held on January 29, 1958 -- featured Toussaint supported by other Nola locals Alvin "Red" Taylor (baritone sax), Nat Perrilliat (tenor sax), or Lee Allen (tenor sax), either Justin Adams (guitar) or Roy Montrell (guitar), Frank Fields (bass), and Charles "Hungry" Williams (drums). While the exact lineup may not be certain, what is undeniable is the masterful energy of these seminal sides. Toussaint revealed to a reviewer that he "had no involvement in the titles of the songs. When I played them, I referred to them as 'Song Number One,' 'Song Number Two' and so on. It wasn't until the record came out that I was informed Kessler had chosen to name each piece after a different racehorse." Once "Whirlaway" b/w the raucous sacred-inspired "Happy Times" scored favorable results, Kessler hit Toussaint up for enough material to compile what would become the full-length Wild Sound of New Orleans (1958) LP. Arguably the best-known of the instrumental lot is the perky "Java" -- which Al Hirt (trumpet) was able to take to the top of the pop singles survey, not to mention carve out a nice career for himself in the process. Other entries worthy of multiple spins include the mile-a-minute "Tim Tam," "Bono," and the musical Mardi Gras that is "Nashua" -- which owes much to Professor Longhair and points the way for Toussaint's future musical aspirations. Similarly, "Wham Tousan" and "Pelican Parade" are evidence of Toussaint's already fully formed keyboard style. The second half of the Complete "Tousan" Sessions (1992) is dedicated to tracks destined for the Seville imprint and credited to "Al Tousan and His Piano." Of the 15 tunes documented during the December 7 and 8, 1959 session only a handful were ever released. Namely, the 45s "Chico" b/w "Sweetie Pie," "Naomi" b/w "Back Home Again in Indiana" -- a rare cover tune for Toussaint, "A Blue Mood" b/w "Moo Moo" (aka "Cow Cow Boogie"), and "Real Churchy" b/w "Twenty Years Later." Interestingly, the latter is nothing more than a recycled and abbreviated edit of the aforementioned "Sweetie Pie." The remainder make their debut and in true Bear Family style are thoroughly annotated in the 20-page liner notes booklet. ~ Lindsay Planer

Rolling with the Punches: The Allen Toussaint Songbook
$13.60
Add to Cart