Most believe his very existence is a sin. But others know he is a necessary evil.

467K ratings
Currently Out of Stock: We'll get more as soon as possible
Notify Me When Available
Add to Wishlist
Format:  Blu-ray
item number:  XRI 42309BR
Also released as:
Hitman for $5.80
Our customers love us! 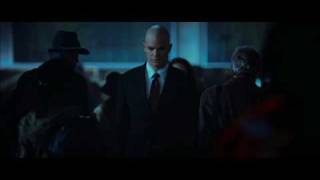 Based on the popular Playstation 2 game, HITMAN chronicles the frame-up and retribution-packed odyssey of Number 47 (Timothy Olyphant), a bald assassin raised from birth to be a killer and tattooed with a barcode on the back of his head. There's lots of BOURNE SUPREMACY-style flash-edits and superhuman stunt work as 47 seeks to find out why moderate Russian presidential nominee Belicoff (Ulrich Thomsen) was the client for his own assassination, a hit that 47 pulled off perfectly, except for one hitch: the target's still alive. For romantic interest we have Olga Kurylenko as a foxy Russian prostitute sold into slavery by the evil Belicoff. She and 47 wind up on the lam together but they'll never be safe as long as Belicoff is still alive. Meanwhile, Interpol agent Mike Whittier (Dougray Scott) has been tracking 47 for years; he's on the scent and about to close in. Luc Besson was the producer on this, and fans of his TRANSPORTER, THE PROFESSIONAL and LA FEMME NIKITA films will eat it up, as it's got the same narrative arc, same hyper-kinetic shoot-em-up flavor, vividly saturated colors, swooping camerawork, tightly choreographed fights, and lots of blood flying from the copious bullet wounds. Vin Diesel executive produced, and one wonders what stopped his big bald head from filling the screen in the lead, but no matter, as Olyphant does a thorough job, speaking in a measured drawl that recalls, of all people, Clint Eastwood in his DIRTY HARRY days.