Marilyn Manson Eat Me, Drink Me

Rolling Stone: 3 stars out of 5 -- "[A] decent, and rather efficient, little goth-pop record." 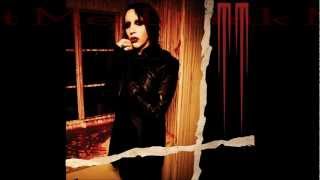 Rolling Stone - p.100
3 stars out of 5 -- "[A] decent, and rather efficient, little goth-pop record."
Spin - p.98
3 stars out of 5 -- "[C]lassic industrial and glam -- martial drum machines, boogie bass, and guitar riffs you usually hear in movies set in the not-too-distant-future."
Entertainment Weekly - p.80
"[The album] boasts a clutch of Goth-rock numbers that, if not evil per se, are still devilishly good." -- Grade: B
Uncut - p.107
3 stars out of 5 -- "[T]racks like 'Heart-Shaped Glasses' draw on Berlin-era Bowie and Iggy's THE IDIOT with brooding panache."
CMJ - p.42
"Alienating a fanbase with subversive musical focus has rarely sounded so good."

Personnel: Tim Skold (programming).
Audio Mixer: Sean Beavan.
2007's EAT ME, DRINK ME is Marilyn Manson's first studio album in four years, and marks something of a turning point in the shock rock king's approach. Sure, the music is still ferociously intense and aggressive, reveling in its heavy metal roots with mountains of crunching guitar and crushing drums; and Manson's infamously grim sensibility is still evident on songs like "The Red Carpet Grave" and "Mutilation is the Sincerest Form of Flattery."
But EAT ME, DRINK ME is also Manson's most intensely personal album. Written and recorded by Manson and guitarist bassist Tim Skold, the album reflects the intimacy of its composition with a confessional, emotive quality not present on previous releases and lyrics that draw on the pain and trauma of Manson's own life. Though characteristically heavy and dark, the album is also brimming with glammy hooks and catchy melodies, an element of Manson's music that's been evident since 1998's MECHANICAL ANIMALS. The result doesn't jeopardize Manson's standing as a sinister anti-hero, but deepens it by making it more human.

Soundtrack
Not Another Teen Movie
$5
Add to Cart
(50+)

64%off
Nickelback
No Fixed Address
$4.98 on Sale
Add to Cart