AS GREAT AS "MUTINY ON THE BOUNTY" 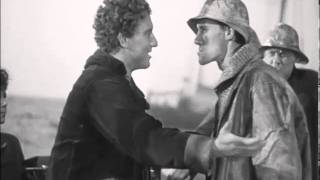 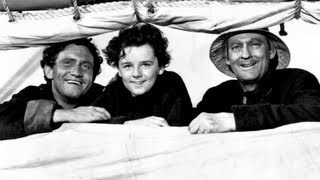 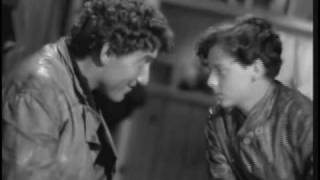 The fishing schooner "We're Here" has just pulled up a different kind of fish: rich, 10-year-old Harvey Cheyne, who tumbled off the side of a sleek ocean liner. Harvey will have to wait months before the "We're Here" returns to harbor, months that will transform him from a spoiled whiner into an honorable young man - all because of the life lessons he learns from Manuel, the humble fisherman who befriends him.

From Rudyard Kipling's classic, Captains Courageous thrills with its seagoing action, grand scale and all-star cast. But what gives it full-masted magnificence is the chemistry between Freddie Bartholomew (Harvey) and Spencer Tracy (Manuel). Tracy won his first Best Actor Academy Award for his towering portrait of the father we all wish for: virile, patient, wise and protective. Set sail for cinema glory.

This Rudyard Kipling story is a family entertainment classic and one of the great films set on the high seas. Harvey Cheyne (Freddie Bartholomew), the spoiled son of a shipping magnate, falls overboard from a luxury liner and is picked up by a Nantucket fishing schooner. Aboard the schooner is a simple, honest, courageous Portuguese fisherman named Manuel, played expertly by Spencer Tracy in an Oscar-winning performance. Forced to earn his keep, Harvey's extended voyage and warm relationships with Manuel infuse him with a whole new set of life values.

Based on Rudyard Kipling's classic novel, cast with top-notch actors, and helmed by Victor Fleming, an A-list director at the height of his craft, CAPTAINS COURAGEOUS is a golden-era classic. Freddie Bartholomew plays Harvey Cheyne, a wealthy, spoiled 12-year-old who falls overboard on his way to Europe. When he regains consciousness on a Gloucester fishing boat, the ship's captain (Lionel Barrymore) puts him to work next to his own son (Mickey Rooney). Harvey sulks at first, then begins a warm relationship with Manuel (Spencer Tracy), a simple Portuguese fisherman. Manuel and the other crew members teach Harvey about life at sea. In the process, he learns to care deeply for the experienced fisherman while becoming a valued crew member himself. But Harvey has one more lesson to learn before he is reunited with his father (Melvyn Douglas). The impact of Kipling's tale collides with Harold Rosson's gorgeous photography and the stellar ensemble troop to make this film a lasting favorite.

Customer Rating:
Based on 12419 ratings.


Here is a "Movie Classic" that truly deserves to be called one. Spencer Tracy and Freddie Bartholomew are the perfect match for the title roles. What a wonderful adventure.