Mutiny on the Bounty

Clark Gable as the daring mutineer in the screen's most exciting adventure story! 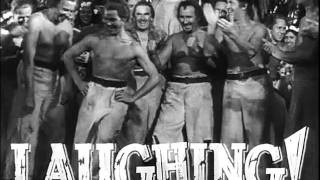 Solidifying his status as Hollywood's #1 male star, Clark Gable is first officer Fletcher Christian, whose will to obey erodes under Bligh's tyranny. And Franchot Tone plays idealistic midshipman Byam, torn by his allegiance to both. That all three portrayals are vividly memorable is accented by the fact that for the only time in Oscar history, three stars from the same film were Best Actor nominees.

MUTINY ON THE BOUNTY is the classic tale of one of the most infamous adventures on the high seas. The story is based on the fictional accounts written by Charles Nortdhoff and James Norman Hall. English conscripts sailing for Tahiti buckle under the chastisements of cruel Captain William Bligh, savagely portrayed by Charles Laughton. Bligh's grotesque abuses of power, including a brutal flogging that results in the death of the sick old ship's doctor, finally inspire a mutiny on the return voyage, conducted under the leadership of fair-minded officer Fletcher Christian, played by the dashing and heroic Clark Gable. Following the mutiny, Bligh and a few cronies are set onto a small dinghy after the successful muntiy, at which point the real adventure begins--Bligh's 4,000-mile journey from Tahiti to the Dutch East Indies. A solid seagoing adventure epic with breathtaking location photography, MUTINY ON THE BOUNTY offers an unparalleled nautical authenticity--the ship photographed and the costumes worn were exact replicas of the 18th-century originals.

This is the classic (and true) tale of the mutiny that took place on the HMS Bounty, led by the courageous and dashing Fletcher Christian. The sailors revolt because of the barbaric and merciless way they had been treated during the voyage by the wicked Captain Bligh.

The Treasure of the Sierra Madre (DVD)
$12.60 Super Savings
Add to Cart