Uncut: 4 stars out of 5 -- "SHEER HEART ATTACK was a leap forward for Queen. It had a thrilling sense of lunacy: any kind of music was permissable as long as it was executed to perfection." 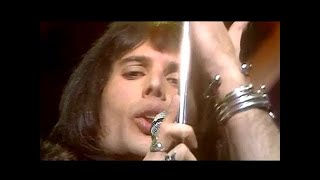 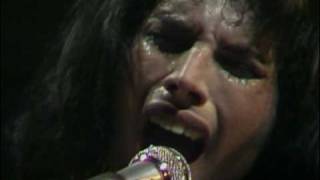 Q - 8/02, p.150
Indispensable - "...Introduced the roaring chrome camp-rock of future Queen....This album was one of the great pop/rock admixtures of the '70s..."
Uncut - p.96
4 stars out of 5 -- "SHEER HEART ATTACK was a leap forward for Queen. It had a thrilling sense of lunacy: any kind of music was permissable as long as it was executed to perfection."
Q (Magazine) - p.118
"[This is] the Queen album most beloved of generations of hard rock bands....The driving rock of the previous record was there in the shape of 'Brighton Rock'..."
Q (Magazine) - p.118
4 stars out of 5 -- "[I]t's on late-1974's SHEER HEART ATTACK that everything fell into place....Grandiloquent rock songs always one guitar solo away from self-indulgence."
Record Collector (magazine) - p.99
4 stars out of 5 -- "SHEER HEART ATTACK is where the sound takes on its own identity, while still being deliciously schizophrenic."

Queen: Freddie Mercury (vocals, piano); Roger Taylor (vocals, drums, percussion, background vocals); Brian May (guitar, background vocals); John Deacon (keyboards, bass guitar).
SHEER HEART ATTACK is widely considered Queen's best pre-"Bohemian Rhapsody" album. Containing their first global hit single, "Killer Queen," it certainly qualifies as one of Queen's best all-time releases. Just prior to the recording of the album, Queen was making very important inroads in America by opening a US tour for Mott the Hoople, but had to cut it short when guitarist Brian May became seriously ill. Instead of moping, the band immediately began writing and recording SHEER HEART ATTACK while May recovered. Upon its release, fans were pleasantly surprised to witness Queen's growth--although there were still plenty of hard rock numbers, other musical styles were tried and perfected, while the energy of their live show shined through in many of their new songs.
The album's other popular single, "Now I'm Here," would prove to be a concert staple for years to come, while the opening "Brighton Rock" is a superb showcase for the many talents of May. Perhaps most significantly, singer Freddie Mercury really came into his own on SHEER HEART ATTACK, having no problem handling ragtime tunes ("Bring Back That Leroy Brown"), sounds from the Caribbean ("Misfire"), unaccompanied piano ballads ("Dear Friends"), or raging heavy metal ("Stone Cold Crazy," "Flick Of The Wrist").

Queen
Day At The Races [import]
$37
Add to Cart