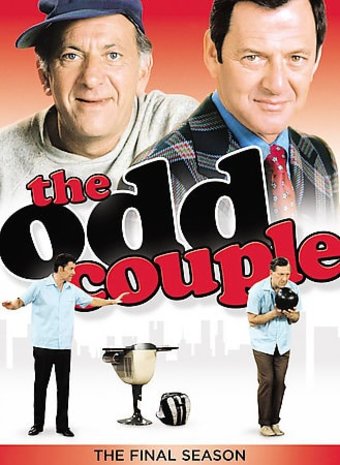 Their characters may have been brought to the big screen by Jack Lemmon and Walter Matthau, but Tony Randall and Jack Klugman went on to match, and arguably surpass, their predecessors' portrayals with the classic 1970s television series THE ODD COUPLE. Based on Neil Simon's hit Broadway play of the same name, the beloved sitcom chronicled the charmingly antagonistic friendship between neat freak Felix Unger (Randall) and carefree slob Oscar Madison (Klugman), whose polar-opposite personalities hilariously clashed after they became unwilling roommates following their respective divorces. Produced by TV impresario Gary Marshall (HAPPY DAYS, LAVERNE & SHIRLEY), THE ODD COUPLE stands as one of the true greats in television history. This collection presents the show's fifth and final season, including the last episode in which Felix finally gets back together with his ex-wife and Oscar celebrates, at long last, having the apartment to himself.