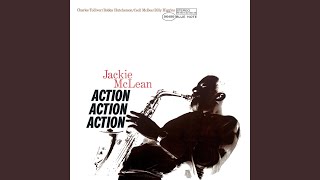 Personnel: Jackie McLean (alto saxophone); Jackie McLean; Cecil McBee (bass instrument); Charles Tolliver (trumpet); Bobby Hutcherson (vibraphone); Billy Higgins (drums).
Audio Remasterer: Rudy Van Gelder.
Liner Note Authors: Bob Blumenthal; Nat Hentoff.
Recording information: New York, NY (09/16/1964); Van Gelder Studios, Englewood Cliffs, NJ (09/16/1964).
Photographer: Francis Wolff.
This 1964 Blue Note release features Jackie McLean and his band in fine form. A hard-bop record with polytonal leanings, ACTION exemplifies an era in jazz when new ideas were truly budding. Ornette Coleman and his associates had been playing free jazz five years prior to the making of this album, but it took a while for the hard-boppers to digest the music and embrace the freedom that the style brought to the art form. Therefore, a lot of the music from this period sounds like it's in transition, and ACTION is no exception.
In other words, ACTION is a good example of the growing convergence of bop and avant-garde. This is heard particularly on the title track, and on trumpeter Charles Tolliver's tune, "Plight." However, the group falls back on their more traditional roots with the standard, "I Hear a Rhapsody" and on the bluesy McLean original, "Hootnan." Each player holds his own on this date, though vibraphonist Bobby Hutcherson stands out the most with some charmingly "inside" playing.