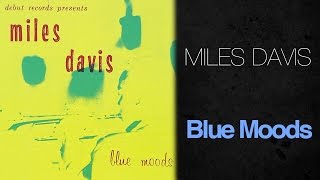 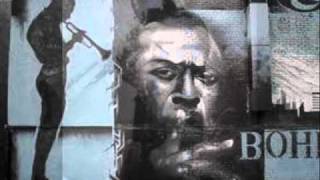 Personnel: Miles Davis (trumpet); Britt Woodman (trombone); Teddy Charles (vibraphone); Charles Mingus (acoustic bass); Elvin Jones (drums).
Recorded at the Van Gelder Studio, Hackensack, New Jersey on July 9, 1955. Originally released on Debut (120). Includes original liner notes by Bill Coss.
Digitally remastered by Kirk Felton (1990, Fantasy Studios, Berkeley, California).
Sometimes the sum of a jazz session is not equal to its parts. Creation is an elusive process, not something to be approached as one would dial a toll-free number, and the mere presence of superstars does not guarantee that sparks will fly.
BLUE MOODS is a serene, moody session, all film noir lighting and smoke-filled cafes. However, given the fact that the trumpeter was joined by such effusive, innovative musical personalities as drummer Elvin Jones and bassist Charles Mingus, one might expect a much more vigorous exchange of ideas. Even Miles, in his autobiography, was at a loss to explain why this July 8, 1955 date didn't take off into the stratosphere.
Still, BLUE MOODS possesses an eerie aura that marks it as a special event in the Miles Davis discography. Originally recorded for Charles Mingus' own Debut label, Davis and his all-pro rhythm team are joined by trombonist Britt Woodman and vibraphonist Teddy Charles, and this unusual instrumentation serves to reinforce the cool vibe of this one-time encounter. On "Nature Boy" Mingus vivisects the beat with clever contrapuntal devices, as Jones locks in the groove with cool brushwork and Davis intones the melody in a straightforward manner. "There's No You" is given a blue rendition, as Mingus and Jones provide a slow, graceful groove. The tentative pace of "Easy Living" amplifies the date's film noir moodiness, as Davis' melodic variations suggest Miss Billie Holiday, while Woodman's "Night In Tunisia"-styled counterpoint, Mingus' Monkish vibes and Jones' light Afro-Cuban beat give "Alone Together" a fanciful Ellingtonian air.

Hot
Prestige Jazz
$4.98 Out of Stock
Save for Later

Sal Marquez
One for Dewey
99¢ CD Sale
Add to Cart