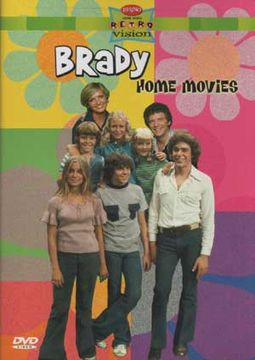 16 ratings
Currently Out of Stock: We'll get more as soon as possible
Notify Me When Available
Add to Wishlist
Format:  DVD
item number:  DG82
Related products:
The Brady-est Brady Bunch TV & Movie Collection! (31-DVD) for $77.50
The Silver Screen: Color Me Lavender for $19
A Very Brady Christmas for $14.50
The Brady Kids - Complete Animated Series (3-DVD) for $20.80
Growing Up Brady for $19
91% recommend us!

A family of 8, squeaky clean humor, playful sibling rivalry, and wholesome universal plot lines are some of the things remembered from "The Brady Bunch." But now for the first time in 20 years, the entire surviving cast reunites to tell the real story of what went on when the television cameras weren't rolling. Produced by Susan Olsen, Brady Home Movies originally aired on CBS receiving phenomenal ratings. This re-edited one hour special contains vintage footage shot by cast members on Super 8 cameras given to them by Robert Reed, exclusive interviews with the cast, a description of the infamous date with Barry Williams and Florence Henderson, and a touching special tribute to Robert Reed who died from AIDS complications in 1992.

A collection of home movies and interviews reuniting the cast of The Brady Bunch twenty years later. Includes anecdotes, memories of the date between Florence Henderson and Barry Williams, and footage from trips the cast took to England and New York City. The result is a touching behind-the-scenes tribute not only to the show, but to the cast and "Mike Brady" himself, actor Robert Reed. A must for any classic TV fan. As originally seen on CBS.