A hormone intended to alter the breeding cycle of rabbits overrunning ranchlands instead turns them into flesh-eating, 150-pound monsters. 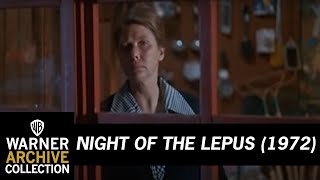 Night Of The Lepus (Trailer)

A hormone intended to alter the breeding cycle of rabbits overrunning ranchlands instead turns them into flesh-eating, 150-pound monsters in Night of the Lepus. Stuart Whitman, Janet Leigh, Rory Calhoun and DeForest Kelley are among the intrepid humans facing the behemoth bunnies. They use guns, flames and dynamite to subtract them. But the rampaging rabbits know how to multiply. Can anything stop these hare-y scary monsters?

When an experiment goes horribly awry, a herd of giant killer rabbits are sent galloping across the globe in this gross-out horror movie from 1972. The technical details of the plot, which involve a hormone designed to quash the rampant sexual proclivities of rabbits, are wisely dispensed with early on in order to allow the rampant bunnies enough screen time to rip into their human persecutors. As the giant beasts throw off the cute, loveable mantle they've worn for so long, a cast including Janet Leigh (PSYCHO) and DeForest Kelley (Leonard "Bones" McCoy from STAR TREK) attempts to fend them off. The primitive special effects and hammy performances have turned NIGHT OF THE LEPUS into a cult classic over the years, with viewers finding themselves tickled by the actors in bunny-suits who woefully try to replicate an exaggerated version of the real thing. After the wonderfully silly film wrapped, director William F. Claxton's career took a surprising turn, as he helmed episodes of popular TV shows such as FAME and LITTLE HOUSE ON THE PRAIRIE.

Science-Fiction | Thriller | Sci-Fi / Horror / Fantasy | Horror Classic
This product is made-on-demand by the manufacturer using DVD-R recordable media. Almost all DVD players can play DVD-Rs (except for some older models made before 2000) - please consult your owner's manual for formats compatible with your player. These DVD-Rs may not play on all computers or DVD player/recorders. To address this, the manufacturer recommends viewing this product on a DVD player that does not have recording capability.