William Kemp was a celebrated planetary voyager, the first to set foot on Mars. It's now 2021, and the celebration is over. But he'll find adventure when he agrees to help a woman hunt for her missing brother at a mining camp on the moon's dark side. 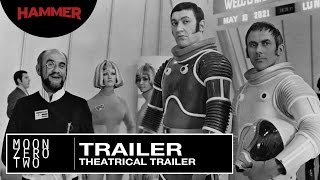 William Kemp (James Olson) was a celebrated planetary voyager years back, the first to set foot on Mars. It's now 2021, and the celebration -- and the era of exploration -- is over. Kemp pilots a lunar-based scavenger craft, retrieving adrift satellites for scrap. But he'll find the adventure he longs for when he agrees to help a woman hunt for her missing brother at a mining camp on the moon's dark side.

"The first moon Western" blazoned ads for this film rife with cowboy-genre motifs. Sci-fi fans may note another influence. From sets to costumes to scenes of men in the blackness of space, Moon Zero Two seems to draw inspiration from a pivotal classic released two years earlier, Stanley Kubrick's 2001: A Space Odyssey.

A spaceman -- with a raygun -- for hire takes on a crooked land baron in this drama that moves Western themes into outer space. In the year 2021, Bill Kemp (James Olson), the first man to walk on Mars, is an astronaut for hire, renting his services to the highest bidder. J.J. Hubbard (Warren Mitchell) is a multi-millionaire who pays Kemp to help blast an oncoming asteroid out of its orbit so that it will avoid the Earth and crash into the moon. However, Hubbard's goal is hardly benevolent. The moon is being excavated for mineral resources, and since fragments of the asteroid in question resemble jewels, it will allow Hubbard to fraudulently jack up land prices on the lunar surface. Kemp also learns that Hubbard was responsible for the death of the brother of Clementine Taplin (Catherine Schell), the woman he loves. Kemp realizes that he can no longer do business with Hubbard, and he sets out to foil Hubbard's schemes before it's too late. MOON ZERO TWO was directed by Roy Thomas Baker, who also made a number of pictures for Hammer Films, including the respected sci-fi cult film QUATERMASS AND THE PIT.

Action | Science-Fiction | Space Exploration | Crime | Outer Space
This product is made-on-demand by the manufacturer using DVD-R recordable media. Almost all DVD players can play DVD-Rs (except for some older models made before 2000) - please consult your owner's manual for formats compatible with your player. These DVD-Rs may not play on all computers or DVD player/recorders. To address this, the manufacturer recommends viewing this product on a DVD player that does not have recording capability.

Planet of the Apes
$8.40 Super Savings
Add to Cart