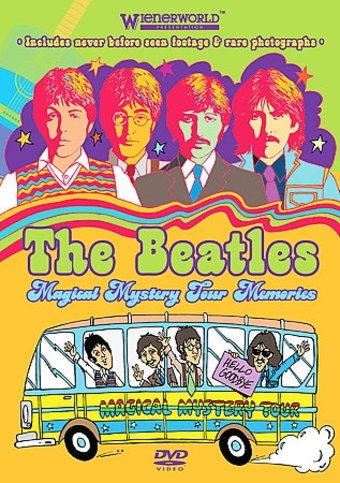 This lively documentary explores the making of the Beatles' 1967 film, THE MAGICAL MYSTERY TOUR. Through the anecdotes of friends and relatives of the band who witnessed the making of the movie firsthand, as well as via never-before-seen 8mm home movie footage, an almost magically upbeat experience is documented for all to see.

Description:
The Beatles - Magical Mystery Tour Memories is an upbeat rockumentary featuring the vivid memories of those who witnessed the making of the cult Beatle movie, The Magical Mystery Tour, in 1967 and features a celebrity cast along with anecdotal stories and unseen 8mm home movie footage, as well as eye-witness accounts from fans, on-lookers and the cast of the movie. Featuring Tony Barrow (Beatles press officer), Mike McCartney (Paul McCartney's brother), Miranda Ward (journalist and friend of the Fab Four), Spencer Davis (Spencer Davis Group), Tony Bramwell (Beatles road manager and close friend of Sir Paul McCartney), Neil Innes (Bonzo Dog Do Da Band), Freda Kelly (principal secretary to the Beatles Fan Club), Dame Peggy Spencer (choreographer), and Victor Spinetti (actor and close friend of John Lennon), sharing their memories with Victor supplying a fascinating commentary to the film. "This is a happy, upbeat film" comments David Lambert, producer and director of Arthouse Pictures, who produced the movie. "Probably the last time the Fab Four were all still getting along." Keith Badman (author and Beatles expert) said "I have seen the rough cut screener and can't wait to see the finished program. It is fantastic." This film is a must have for all Beatles fans worldwide and an opportunity to look back fondly at the heady days of the swinging 60s.