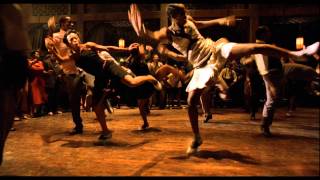 Entertainment Weekly - 09/01/2006
"[A] madly soulful and enjoyable period musical....IDLEWILD is a romp, a ticket to rowdy good times..."
Total Film - 10/01/2006
3 stars out of 5 -- "[T]his is a luscious ragtime musical....Surprisingly polished performances from the two leads grab the attention..."
Uncut - 10/01/2006
3 stars out of 4 -- "OutKast's music is impressively varied and dynamic throughout."
Box Office - 10/01/2006
"Especially exhilarating are the dance sequences, anachronistic fusions of hip-hop and swing...cut to a rhythm that emphasizes the moves on show."
Sight and Sound - 10/01/2006
"[Barber] impresses most in purely visual moments. He creates an imaginative inner life for his protagonists."
Ultimate DVD - 03/01/2007
3 stars out of 5 -- "The musical sequences are outstanding, with the exceptional choreography and flashy cinematography more than a match for the big numbers."

André Benjamin and Antoine A. Patton--aka Andre 3000 and Big Boi of the hip-hop duo Outkast--star in this uproarious period piece, a comedy-drama-musical-action film set in Prohibition-era Virginia. Patton plays Rooster, the lead singer at a raucous, high-class all-black club called Church. Benjamin plays Percival, his best friend, who is the piano player at the club and the shy son of a funeral parlor owner (played by Ben Vereen). Terence Howard (HUSTLE AND FLOW) provides the menace as Trumpy, a vicious underling of Rooster's bootlegger father (Ving Rhames). Meanwhile, a beautiful singer (Paula Patton) comes to town and Percival finds himself falling in love--much to his terror, as he's afraid to leave the small community of Idlewild for the big city: Chicago, her next stop. As Rooster prepares for a showdown with Trumpy, Percival faces his fears, the band heats up, and the guns and songs come out for a big final night at the Church.

This is clearly a labor of love for writer/director Brian Barber and the Outkast crew: a color-saturated adrenalin rush of witty dialogue, loving attention to period detail, boisterous and athletic dancing, and lots of eye-popping digital animation (such as Rooster's talking/singing whiskey flask). Appearing in a bevy of diamond-studded cameos and bit parts are Cicely Tyson, Macy Gray, Cedric the Entertainer, Patti LaBelle, Jackie Long, Faizon Love, Malinda Williams, and child rapper Bobb'e J. Thompson, who is hilarious--and demonstrates some very fancy footwork--as the young Rooster.