Uncut: 4 stars out of 5 - "[With] a title track that's a bare showcase for Eddie Hazel's 10-minute guitar solo of mournful commitment." 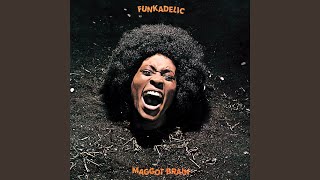 Hit It and Quit It (Music Video) 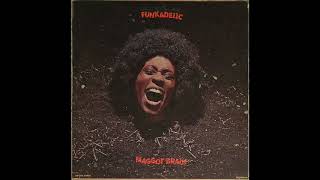 Uncut - p.122
4 stars out of 5 - "[With] a title track that's a bare showcase for Eddie Hazel's 10-minute guitar solo of mournful commitment."
Mojo (Publisher) - p.52
Ranked #4 in Mojo's "The 50 Most Out There Albums Of All Time" - "The music, seismic and bold, melds fright-inducing lyrics with a transcendental backdrop."

Personnel: Eddie Hazel (guitar).
Jimi Hendrix's untimely death in September of 1970 left a gaping hole in the funk-rock genre. With 1971's MAGGOT BRAIN, Funkadelic showed that they were rightful heirs to Hendrix's throne. This is the album where, all at once, everything seems to come together for the legendary band. Most obviously, the songwriting is sharper and more focused. As on their previous releases, epic instrumental compositions dominate. But this time they are much more coherent and less reliant on studio trickery and psychedelic effects (with the exception of the album's closer, the instrumental freak-out "Wars of Armageddon").
The stunning title track provides the ultimate vehicle for Funkadelic's late and great guitarist, Eddie Hazel. This moving ten-minute instrumental has Hazel playing through many peaks and valleys, wringing passion from his six-string, and leaving the listener drained by its conclusion. Another highlight is "You And Your Folks, Me and My Folks," a song about interracial relationships that is one of Funkadelic's most soulful tracks ever. Also included are the heavy metal thrasher "Super Stupid," the prime funk workout "Hit It And Quit It" (featuring the great Bernie Worrell on organ), and "Can You Get To That," one of the sunniest, most memorable funk-gospel-soul songs in the band's--or anyone's--catalogue. MAGGOT BRAIN is unquestionably one of rock and funk's all-time classics.

New
Parliament
The Clones Of Dr. Funkenstein
$25.95
Add to Cart

Funkadelic
Standing On The Verge of Getting It On [import]
$27.50
Add to Cart

Hot
Funkadelic
Standing on the Verge of Getting It On [Bonus Tracks]
$18.98 on Sale
Add to Cart
(3)