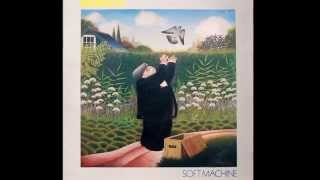 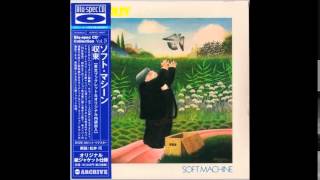 In the extensive discography of Soft Machine, albums from the band's mid- to late-'70s jazz-rock period are sometimes afforded the least respect. Fans all have their favorite LPs representing a particular "classic" lineup -- as well as opinions about other albums signifying that Soft Machine's best days were behind them. Some feel it was all over when Robert Wyatt left after Fourth (or stopped singing after Third), and it's probably even possible to find somebody somewhere who lost interest when Hugh Hopper replaced Kevin Ayers after Volume One. However, nearly everyone agrees that the band's heyday was over by the time the three late-period Soft Machine albums on Harvest were released. And yet, these albums have much to recommend them. The first, Bundles, had the feeling of a new beginning for Soft Machine, for reasons including the label switch from Columbia to Harvest and even the LP's name -- not merely a number like Six or Seven this time around. But the biggest change came from the addition of hotshot guitarist Allan Holdsworth to the lineup, the first time in the band's history that an electric guitarist would be given such a prominent soloing role. Like three other members of the Softs' Bundles incarnation -- reedman Karl Jenkins, drummer John Marshall, and bassist Roy Babbington -- Holdsworth had played in Nucleus along with trumpeter Ian Carr, and like those three Nucleus alumni, Bundles introduced him to his largest audience thus far. Holdsworth wasted no time in making an impression. Playing single-note runs on "Hazard Profile, Pt. 1" (based on Jenkins' Nucleus composition "Song for the Bearded Lady," first heard on We'll Talk About It Later) so insanely fast that even air guitarists might have trouble keeping up, Holdsworth seemed to be a viable Brit entry into the fusion guitarist sweepstakes dominated by the likes of John McLaughlin and Al di Meola.
Holdsworth provided the band exactly the jolt it required; contrast Bundles with Seven, the comparatively lackluster final Columbia LP, which had the same lineup as Bundles minus the guitarist. Jenkins could be a rather mild and unassertive reed player, leaving it to the ever reliable Mike Ratledge's keyboards to take up the slack. But by the time of Bundles, Ratledge himself was beginning to retreat; he had apparently decided to mothball his old fuzz organ, favoring full-chord fills when comping and analog synth for his solo on "Hazard Profile, Pt. 5." Given Ratledge's diminishing role, the decision to add Holdsworth to the band came none too soon. Aside from the guitarist, Soft Machine's most incendiary player on Bundles turned out to be drummer Marshall, powerful on the straightaway and atmospheric while taking center stage on "Four Gongs Two Drums." As for the material itself, principal composer Jenkins -- who had been gradually taking over the conceptual reins since his first appearance on Six -- had an ability to write sleek and streamlined jazz-rock that still managed to recall the band's past, particularly in his penchant for odd rhythmic permutations ("Bundles") and ethereal, minimalist-influenced keyboard ostinatos ("The Floating World") that harked back to Ratledge's tape experimentation on Third. Bundles might not have been classic Soft Machine in most people's books, but the band's new guitarist, new label, and new outlook seemed to signal a fresh start. As it turned out, Holdsworth would leave before Soft Machine's next LP. And, more significantly for any band claiming the Soft Machine name, so would Ratledge, the group's sole remaining original member. And yet the band's story was not over, and there was still some good music to follow. [Several of the strongest tracks from Bundles can also be heard on Tales of Taliesin: The EMI Years Anthology 1975-1981, which also includes selections from Softs, Alive & Well: Recorded in Paris, and Land of Cockayne.] ~ Dave Lynch

The Albion Band
Battle of the Field
$20.60
Add to Cart