Entertainment Weekly: "...[A Tribe Called Quest's MIDNIGHT MARAUDER] sounds as fresh as their first...rappers Phife and Q-Tip manage to hold attention without resorting to gun references or expletives..." - Rating: A 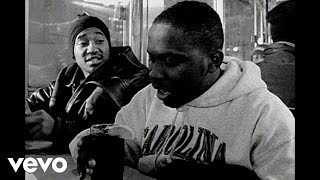 A Tribe Called Quest: Jonathan "Q-Tip" Davis, Malik "Phife-Dawg" Taylor (rap vocals); Ali Shaheed Muhammad (turntables).
Additional personnel: Large Professor, Trugoy, Busta Rhymes, Raphael Wiggins.
Producers: A Tribe Called Quest, Skeff Anselm, Large Professor.
Engineers: Bob Power, A Tribe Called Quest, Tim Latham.
Recorded at Battery Studios, Platinum Island, Matermix and Sorcerer Sound, New York, New York.
Third and last of the "classic" Tribe records (preceding the addition of Jay Dee and the formation of "the Ummah" production team), MIDNIGHT MARAUDERS is not as groundbreaking as PEOPLE'S INSTINCTIVE TRAVELS or as consistently on-point as LOW END THEORY. However, it is arguably the group's most musically sophisticated album. The tracks balance jazz, soul, and even reggae influences with pure hip-hop to arrive at a completely distinctive Tribe sound, the logical evolution of the bop-inflected hooks which characterized LOW END THEORY.
Production-wise, Tribe graduates from a cool school aesthetic to an electric jazz sound (reminiscent of fusion-era Miles Davis). Lyrically MIDNIGHT MARAUDERS finds the group's abstract poetics in excellent form as usual, and Phife is miles ahead of the "mayor-flavor" rhymes of "Can I Kick It." As per the title, the album develops the introspection of "After Hours" into a nocturnal feel which winds it's way through "Midnight," the party-rock of "We Can Get Down," "Clap Your Hands" and the complex layers of "God Lives Through."

Peaches
The Teaches Of Peaches
$45.90
Add to Cart