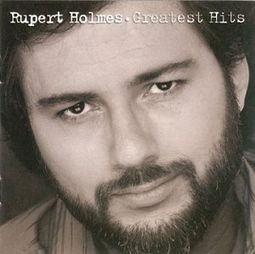 Personnel includes: Rupret Holmes (vocals).
Digitally remastered by Jim Phillips (Universal Mastering).
Liner Note Author: Rupert Holmes.
Arranger: Rupert Holmes.
Rupert Holmes' swinging '70s sound only occupied a small portion of his career, as Hip-O's 18-track 2000 collection Greatest Hits illustrates. He had a yen to be a little bit more than a soft rock craftsman -- he drew heavily from Brill Building and Tin Pan Alley, plus Hollywood musicals, wryly obvious social commentary, and soft pop to create a distinctive blend. It's often overly ambitious -- even his biggest hit, Partners in Crime, is a sociological portrait of Me-era dating -- and it can be a little fussy, particularly in the years after Partners in Crime, when his recordings gained the antiseptic cleanliness of '80s adult contemporary (even on his nostalgic theme song for "Remember WENN"). Greatest Hits contains all these aspects, perhaps downplaying the appealingly weird early '70s recordings a bit too much (those are collected on Varese's Epoch Collection), but giving a good idea of what Holmes' career was all about. And be forewarned -- it's not just about Pina Coladas, and not a lot of these songs sound like that. ~ Stephen Thomas Erlewine