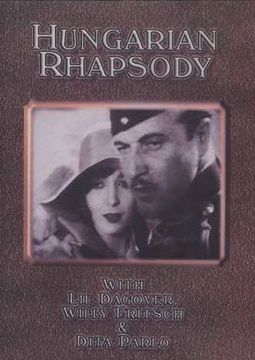 Franz, an impoverished army officer wants to marry Marika, the daughter of a foreman. Without money he is unable to, so he turns to the wiles of Camilla, The General?s bored wife. The General hears of the tryst and tries to catch the lovers together.

Originally UNGARISCHE RHAPSODIE, this opulent Erich Pommer production stars Lil Dagover, Dita Parlo, and Willy Fritsch. The latter is cast as Franz, a dissolute young Austrian Army officer who gets himself into an embarrassing situation with the worldly Camilia (Dagover), the wife of elderly Baron Barsody (Leopold Kramer). Franz is rescued from public disgrace by pretty Hungarian peasant girl Marika (Parlo), who puts her own reputation on the line in the process. Out of gratitude, he asks Marika to become his wife, which she does, thereby apparently "absolving" the hero of his previous peccadilloes. Julian Johnson wrote the English-language subtitles for this heaping helping of mittel-European schmaltz.

Silent | Melodrama
This product is made-on-demand by the manufacturer using DVD-R recordable media. Almost all DVD players can play DVD-Rs (except for some older models made before 2000) - please consult your owner's manual for formats compatible with your player. These DVD-Rs may not play on all computers or DVD player/recorders. To address this, the manufacturer recommends viewing this product on a DVD player that does not have recording capability.