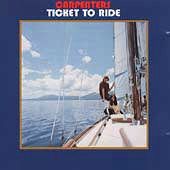 TICKET TO RIDE was originally released on LP in 1969 under the title OFFERING.
The Carpenters: Richard Carpenter (vocals, keyboards); Karen Carpenter (vocals, bass, drums).
Additional personnel: Gary Sims (guitar); Joe Osborn, Bob Messinger (bass); Herb Alpert (shaker).
Includes liner notes by Herb Alpert.
Digitally remastered by Richard Carpenter.
As strange as it may seem in light of their decades of commercial success, Karen and Richard Carpenter's first album was a flop when it was originally released in 1969 under the title OFFERING. Only after the siblings' mournful cover of The Beatles' "Ticket To Ride" became a surprise hit did the album, quickly withdrawn and reissued under the single's title, follow suit.
TICKET TO RIDE is an interesting and arresting debut. The album is bracketed by Richard Carpenter piano instrumentals ("Invocation" and "Benediction") and featuring covers of the Youngbloods' "Get Together" and Buffalo Springfield's excellent "Nowadays Clancy Can't Even Sing" alongside a number of Richard Carpenter-Joe Bettis originals. The CD was remastered by Richard Carpenter in 1998 as part of a general overhaul of the Carpenters' A&M catalogue. A limited-edition Japanese release features 32-bit digital remastering and an LP-style slipcase.